Originating in the Song Dynasty (960-1279 AD), the "horse coin" was not actual currency. Although Chinese literary figures have made mention of horse coins throughout the centuries, few have made it clear exactly how the coins were used. Collectors today believe horse coins were either pieces used on game boards or counters for gambling. 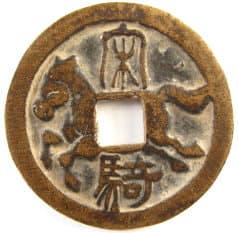 Horse coins are usually made of bronze or copper although, in some rare cases, ivory and horn were used.  Most common horse coins measure around 3 centimeters in diameter with a square or circular central hole.

The horses depicted on the coins vary in position.  Some are lying on the ground sleeping.  Others are turning their head and neighing.  Or, as in the example shown here, the horse is shown galloping forward with its tail raised high.  Unfortunately, the horse's saddle always seems to be at the central hole of the coin which prevents us from learning more about this aspect of ancient Chinese culture.

Among all the horse coins, those made in the Song Dynasty (960-1279 AD) are considered to be the finest. They were made from high-quality metal and with fine detail.  The coin shown at left is representative of the Song horse coins although it would be difficult to confirm that this particular piece dates from that period.

Horse coins display many of the most famous horses in Chinese history. For instance, in the early Western Zhou Dynasty (c. 11th century-771 BC), King Mu (穆王) once rode on a chariot with eight outstanding steeds.  The names of the eight horses can be found on horse coins although there is some disagreement as to which set of eight names passed down through history is correct.  The names of King Mu's horses described their outstanding characteristics and included "Beyond Earth", "Rush by Night", "Windswept Plumes",  "Finer than Flashing Light", "Faster than Shadow", "Wing Bearer", "Faster than Light" and "Rising Mist".  Other historical texts list King Mu's horses as "Bay Steed", "Smoked Ebony", "Skewbald Chestnut", "Great Yellow" and "Green Ear".

There are also horse coins depicting the victorious, yet ruthless, General Bai Qi of the ancient Kingdom of Qin during the Warring States Period (475-221 BC).

When Qin Shi Huang put an end to the Warring States Period and united China into the first empire (221-207 BC), he chose the seven best horses from the thousands of military horses who had fought in the battles.

In order to improve the quality of his stable, Emperor Wudi of the Western Han Dynasty (206 BC - 24 AD) searched for the best stallions outside his empire. To get the mysterious hanxue (sweating blood) horse which he believed were the divine "Horses of Heaven" that could be ridden to immortality, he fought a three-year war beginning in 101 BCE against a small kingdom (Ferghana) located in today's Uzbekistan.  While the emperor's army captured some 3,000 hanxue horses, only about 1,000 survived the long trip home. Many legends and historical records state that when such horses galloped, their sweat was the color of blood.  Some modern scientists now attribute the "blood" sweat to the parasites which infested the tissues beneath the skin of the horses.  After strenuous movement, the blood would flow out with the sweat.  (Please see "Sweating Blood Horse" Coin for a detailed discussion.)

Another set of famous horses depicted on horse coins is associated with Emperor Taizong (Li Shimin) of the Tang Dynasty (618-907 AD).  These horses are also celebrated in a famous relief sculpture outside his tomb and are known as the "Six Chargers of Emperor Taizong".

Finally, a very few horse coins will display a rider on the horse in order to commemorate famous battles from ancient Chinese history.  Please see the "Battle of Jimo" Horse Coin as an example. 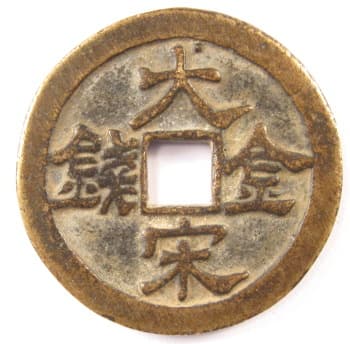 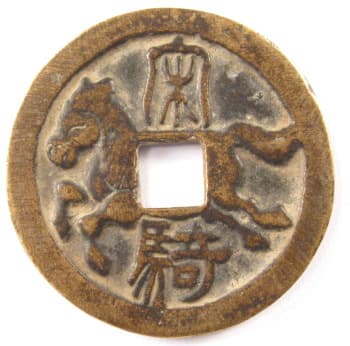 The reverse side shows a galloping horse with the inscription song qi (宋骑) which means "a rider of the Song (dynasty)". 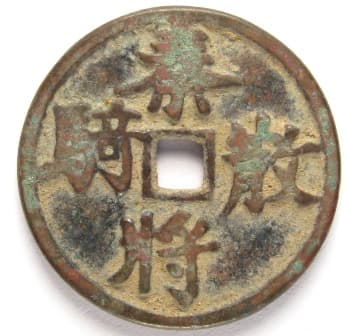 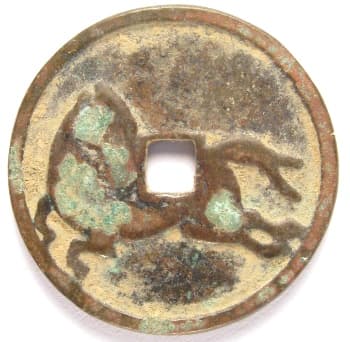 The inscription on this horse coin is qin jiang san qi (秦将散骑).

Qin jiang (秦 将) refers to a general from the ancient state of Qin during the Warring States period (475-221 BC).

The general referred to is General Bai Qi (白起), a ruthless military leader, who won more than 70 battles.  Following each victory, he would order his men to slaughter the defeated soldiers.  Historical records credit him with the slaughter of hundreds of thousands of enemy soldiers.

General Bai Qi was forced to commit suicide by the King of Qin in the year 257 BC.

The inscription therefore refers to the attendants or followers of General Bai Qi who would advise or counsel him.

The reverse side of the coin depicts a galloping horse. 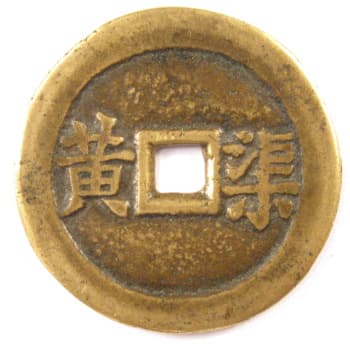 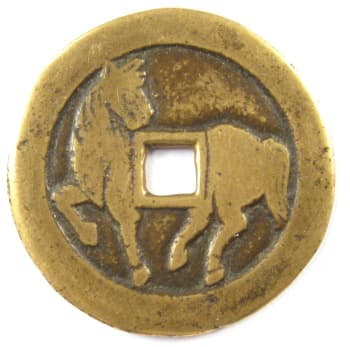 This horse coin depicts Qu Huang (渠黄), meaning "Great Yellow", which was one of the eight great horses mentioned above of King Mu of the Western Zhou Dynasty.

This particular specimen is 35 mm in diameter and weighs 11.9 grams. 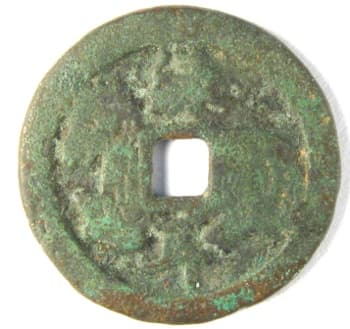 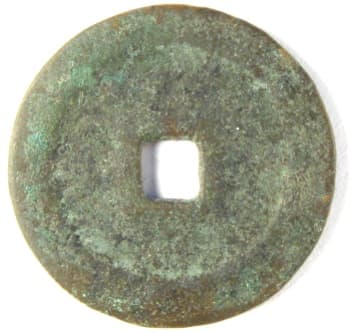 This is another horse coin honoring one of King Mu's famous horses.

The obverse side of the coin, at the far left, displays a galloping horse.

The two character inscription, with one Chinese character above and one character below the square hole, reads lu er (绿耳).

The heavy green patina on the coin is appropriate because lu er translates as "Green Ear".

The reverse side of the coin is blank. 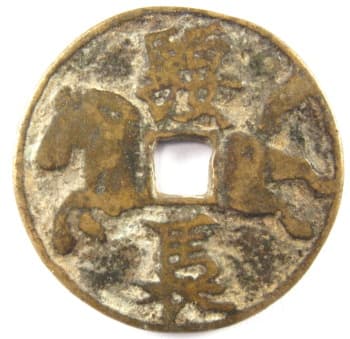 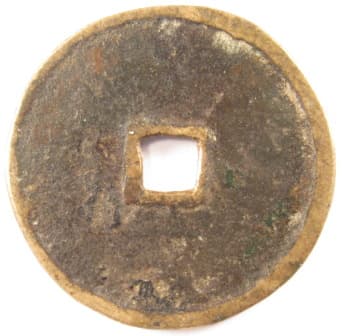 The inscription on the obverse side of this horse coin reads piao niao (骠袅) which translates as "fast and slender".

The reverse side is blank.

The coin is 27 mm in diameter and weighs 6 grams. 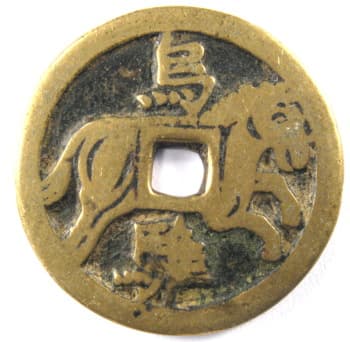 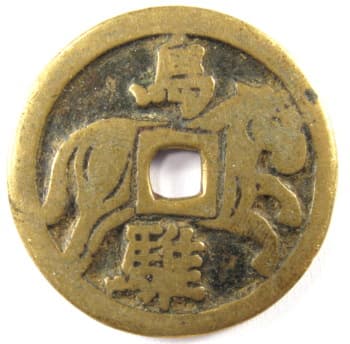 The diameter of the coin is 30mm and the weight is 9 grams. 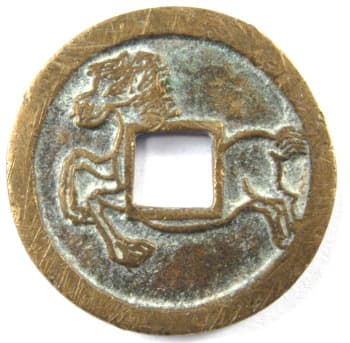 The coin is 27mm in diameter and weighs 5.5 grams. 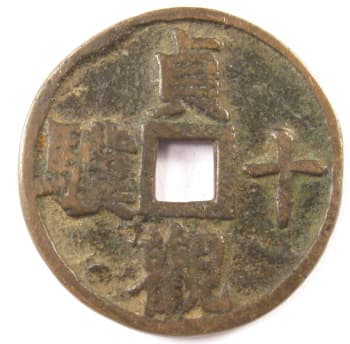 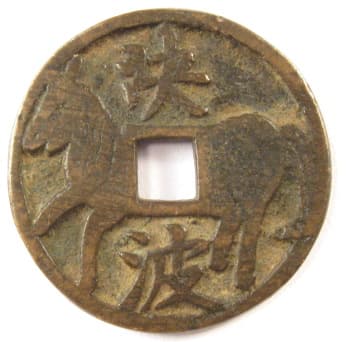 The inscription on the obverse side of this horse coin is read top to bottom and right to left as zhen guan shi ji (贞观十骥) which means "ten thoroughbreds of Zhen Guan".  Zhen Guan refers to the era during which Emperor Taizong (Li Shimin) of the Tang Dynasty (618-907 AD) ruled.

The Chinese characters on the reverse side are jue bo (诀波) which was the name of one of these horses.  Jue Bo would roughly translate as "bursting as a wave".

The coin is 30mm in diameter and weighs 9.7 grams. 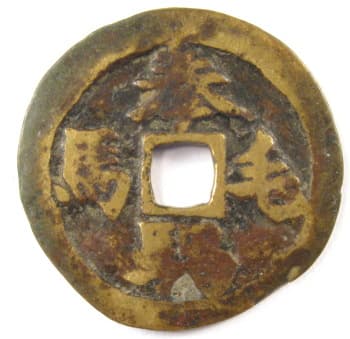 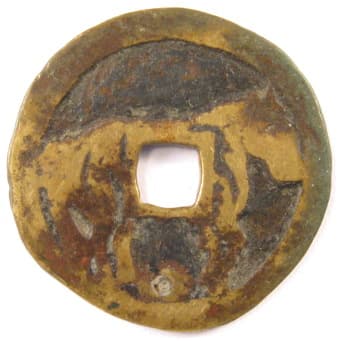 Quanmaogua died on the battlefield after being hit by 9 arrows, 6 in the chest and 3 in the back.

The inscription, which is read in a clockwise manner beginning with the character at the top, is quan mao gua ma (拳毛騧马).

The literal translation is "fist hair piebald horse".  Actually, the name is believed to be a transliteration of Turkic into Chinese.  Turkic is a language from Central Asia where the horse may have originally come.

Scholars now believe that the name Quanmaogua was probably meant to describe a horse that had curly yellow hair.

During the time of the Sui and Tang dynasties, people would have considered a horse with these characteristics to be rather ugly (丑).  General Li Shimin, however, had the ability to identify a horse that had the qualities needed to help him succeed in battle even though the animal may have been physically unattractive.

According to the Penn Museum, the name Quanmaogua indicates a "saffron-yellow horse with a wavy coat of hair".

Four of the six stone reliefs are in China and displayed at the Stele Forest (Beilin Museum 碑 林) in Xi'an.  The stone relief of Quanmaogua, as well as the one for Saluzi ("Autumn Dew" 飒 露紫), were stolen in 1914 and sold by C.T. Loo (Ching Tsai Loo 卢 芹斋) in 1918 to the Penn Museum at the University of Pennsylvania (宾夕法尼亚大学) where they are on display.

The coin is 31mm in diameter and weighs 9.5 grams. 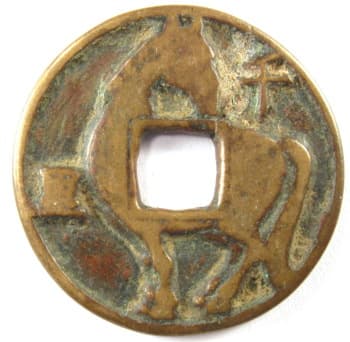 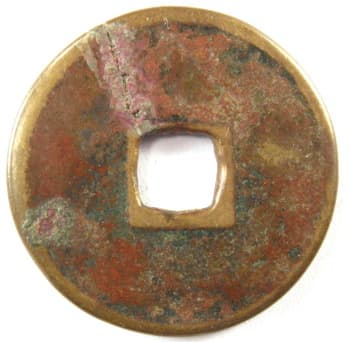 The term qian li or "1,000 li" refers to the ancient accomplishment of Zhaofu who was the carriage driver of King Mu of the Western Zhou Dynasty. Zhaofu was able to cover a distance of 1,000 li in a single day in order to return King Mu from a hunting trip in time to put down a rebellion in the capital.

The coin is 28mm in diameter and weighs 6.4 grams. 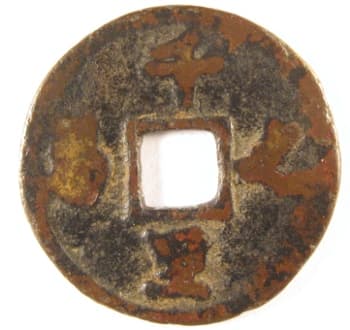 The inscription is similar to the above coin and reads qian li zhi ma (千里之马) which translates as "1,000 li horse". 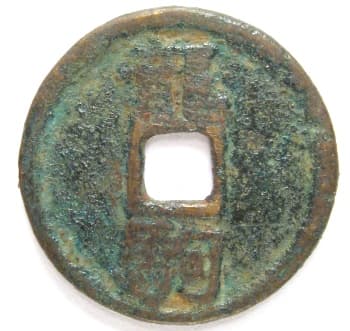 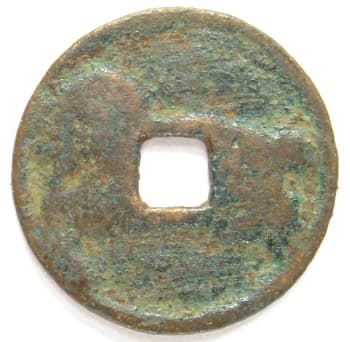 The inscription on the obverse side of this old Chinese horse coin is long ju (龙驹) which translates as "Dragon's Colt".

The reverse side depicts a "dragon colt" horse.

Dragon colt usually refers to a horse that is white and tall.

The term long ju (龙驹) can be traced back to the ancient Chinese text the "Rites of Zhou" (zhou li 周礼) which dates to the second century BC and is considered one of the classics of Confucianism.  This ancient ritual text describes a "dragon colt" as a horse which is "more than eight chi (尺) tall" measured from the front hoof to the shoulder.  One chi, during the time of the Zhou, was about 16.5 centimeters. 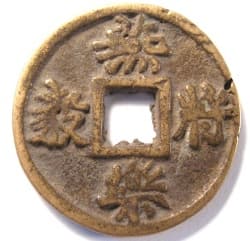 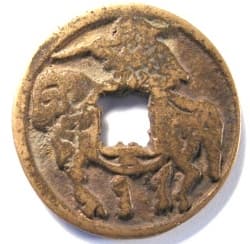 Horse coins typically honor only famous horses but a few of these coins display a rider on the horse in order to commemorate famous battles from ancient Chinese history.

The horse coin at the left has the inscription yan jiang yue yi (燕將樂毅) which translates as General Yue Yi of the State of Yan.  (Sometimes the name is translated as General Le Yi.)

The reverse side of the coin shows General Yue Yi carrying a weapon while on horseback.

General Yue Yi played a major role in one of the most famous battles of ancient China.

This horse coin commemorates one of the most famous generals in Chinese history.

The inscription reads wu jiang sun wu (吴将孙武) which translates as "Sun Wu (孙武) the General (将) of the State of Wu (吴)".

The reverse side of the horse coin portrays Sun Tzu carrying a sword over his shoulder while riding his horse.

This horse coin was sold at China Guardian Auction in 2013.