It is interesting that this particular type of old Chinese charm always has 24 characters (symbols) on a side.  I have done some research but so far have not been able to determine from any source as to exactly why the number of characters is always 24.

Possible reasons are proposed below.

Twenty-four is a multiple of 8.  Eight is considered a very auspicious number in Chinese because of the similar pronunciation in certain Chinese dialects of the number "8" and the Chinese for wealth or "good fortune".

The special Chinese compass (luo pan 罗盘) used in feng shui (风水) has a ring which indicates 24 directions poetically referred to as "mountains" (shan 山) each 15 degrees apart.  The 24 "mountains" include 4 of the 8 trigrams which are used as intercardinal (corner points), 8 of the 10 Heavenly Stems (excluding the two Earth Stems), and the 12 Earthly Branches.

The number 24 is also the sum of the 12 months of the year and the 12 shichen (时辰).  In ancient China, the day was divided into 12 two-hour periods which were called shichen.

Confucianism dominated Chinese society for two thousand years and included as its primary virtue "filial piety" which was respect for one's parents and ancestors.  One of the most famous historical collections of stories concerning how children displayed filial piety, and known by all Chinese, was "The Twenty-Four Examples of Filial Piety" (ershisixiao 二十四孝).  (For a very interesting discussion of a Confucian charm depicting four of these stories please visit Confucian Charms.)

The first religious Daoist sect, known as Wudoumi Dao (五 斗米道 "Five Bushels of Rice"), was established by Zhang Daoling at the end of the Han Dynasty and organized into 24 districts or dioceses (zhi 治).

Finally, the reason for 24 characters may be associated with the Chinese traditionally viewing life in groups of 12.  For example, a child grew into adolescence at the age of 12.  A person entered society for the first time at age 24.  At 36, a person reached maturity.  At 48, a person was expected to have accomplished something in life and then to retire at age 60.

Whatever the real reason may be for having exactly 24 fu characters and 24 shou characters, anyone who appreciates the beauty of Chinese calligraphy will certainly enjoy viewing these charms. 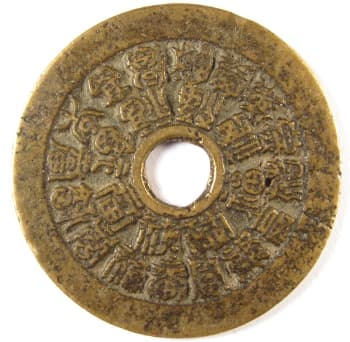 This old Chinese charm has the "good fortune" character fu (福) written 24 times on one side.

Each character is written in a slightly different way or style.

You will also notice that this type of charm has a circular hole instead of the square hole found on Chinese coins.

Most charms with round holes were meant to be worn on a necklace or hung from the waist.

The diameter of this piece is almost 45 mm and the weight is 21.9 grams. 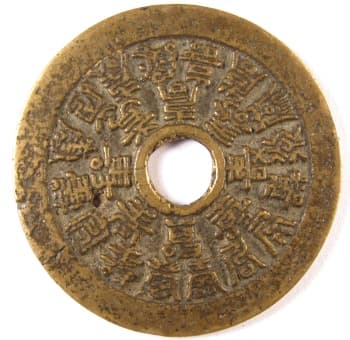 The other side of the charm has the longevity character shou (寿) written 24 times.

Each of the characters is written in a slightly different way.

This is a very old and worn charm with 24 of the "good fortune" character fu (福) on one side.

All of the characters are written in a different style. 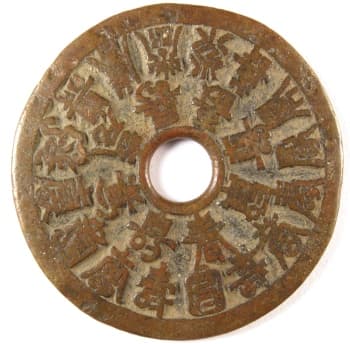 There are 24 variations of the longevity character shou (寿) written on the other side.

This charm also has a round hole in the center indicating that it was meant to be worn.
Additional old Chinese charms representing "good fortune" and "longevity" can be seen at Charms with Auspicious Inscriptions.